How to Stabilize Shaky Footages using a GoPro

Shaky footages are the biggest no-no when it comes to filming. While some of the cameras in the market come with inbuilt stabilization to stabilize your shots, the GoPro doesn’t have such features, so it is almost necessary to invest in some stabilizing tools when filming with your GoPro.

Stabilizing can be done both during post filming, as well as during filming.

In post filming, professional editing softwares like Adobe Premiere Pro and Final Cut Pro have video stabilization features which smoothen out any jitters in your videos. Alternatively, a free option (Albeit not as effective) is to utilize YouTube’s free stabilization feature, which is an available option once your video is uploaded to YouTube.

If you aren’t as tech savvy with postproduction softwares, then you should look at tools that do the stabilization for you during filming. Here’s a few ways to achieving stable footages during filming:

Unknown to many, the most stable part of our body is the centre core axis, as it produces little to no movement. Parts that are within this central region include our head, mouth and chest. When filming without any tools, the best natural stabilization can be achieved by placing the GoPro on these parts. Our favourite position is placing the GoPro on our foreheads or in the mouth as it doesn’t just allow for better stability, it also provides a first person point of view during filming. Alternatively, invest in a cheap Headstrap or Chest Mount to have a hands free filming experience

If you have a Monopod/Pole, use it upside down, or with the camera facing downwards. This takes advantage of the natural gravitational force to aid with your camera stabilization, watch our video on poles to find out more at GoPro101-Monopods.

There are a few ways to stabilize a shaky footage which are to use parts of your head, mount and/or gimbal.  By putting your GoPro against your forehead or in the mouth, it is more stable as it only capture when you turns your head. Mounts need to be attached on an object while gimbals are handheld stabilizer.

If you’re looking for a gadget with more stability option of either mechanical gimbal or electronic gimbal, you can find out more below. 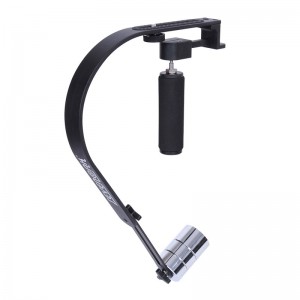 While Body Parts and Poles/Monopods may assist with some stability, you are limited to filming only selected angle shots (Namely, Head view, Chest View, and Low Angles). An upgrade to this is to get an inexpensive Mechanical Gimbal. The Mechanical Gimbal is a manual stabilizer which uses counterweights to obtain stabilization by balancing out any shift in weight during movement. The Mechanical Gimbal functions well in slow, calculated movements but perform poorly during swift and/or sudden movements. This option would not be good for sporting events, and certainly not if you’re using it to film your next kickass, highly intense action movie!

Having a low budget allows you to get a Mechanical Gimbal. It functions manually with the weight balance at the bottom that determines the stability of your footage. The level of stabilized footage depends all on your skill to handle this gimbal. For example, position the gimbal while running during the race to get the right angel of a steady footage. With this, it is light in weight because it does have neither motor nor batteries. 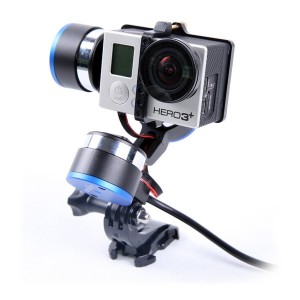 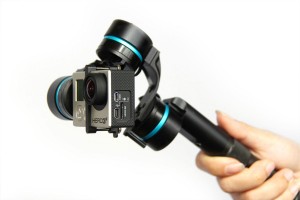 If you’re looking for a responsive stabilizer, then the Electronic Stabilizer is the way to go, although it does come at a price. Not only is it able to stabilize your shots responsively, it also comes with an inbuilt remote which allow little tweaks in movements during filming. Filming with an Electronic Stabilizer is fuss free once everything is properly set up, and is perfect for every type of filming. Worth every penny you pay, we think!

However, Electronic Gimbal is a choice for high budget. This automatic high technology gimbal is able to cover all angels with an attached remote which function easily.  This gimbal is recommended for activities during vacation and so on. For instant, recording video by using stabilizer that only requires quick adjustment before sky diving. Electronic Gimbal will be highly recommended.

In Summary, stabilization is important and so do invest in the right tool(s) for your use. Opt for Body mounts or Mechanical Gimbals if you’re on a budget, but we definitely think the Electronic Stabilizer is a better long term investment if you’re particular about getting stable shots!

Mechanical Gimbal is inexpensive but there are limitations. Therefore, you should get an Electrical Gimbal as it is better in term of their specs, user friendly and incredible function. You do not need skills to position well as the gimbal will do it for you. So, get a good ‘companion’ for your GoPro that give high quality of steady footage today.